Welcome to the Zeus Community Forums!
Read through the content contained in the links before posting a Help Thread:
Central Information Repository
Help and Support

If you want to paste code please use Pastebin to do it, we are currently having trouble with the spambots. 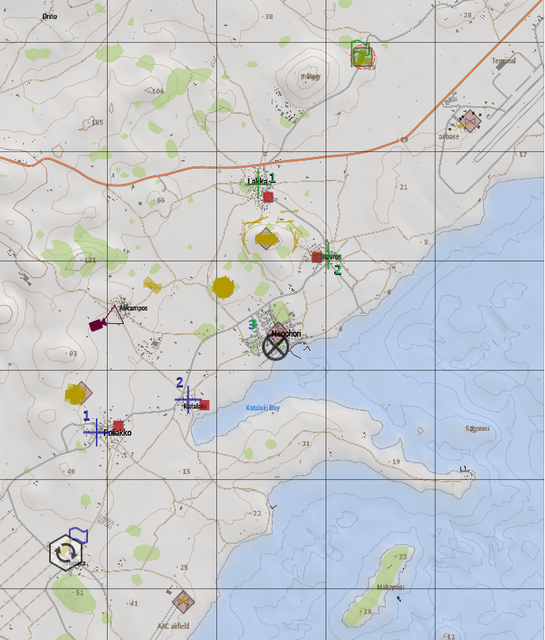 Side objective:
Each team can commandeer a littlebird (transport chopper) on the airfield. Light résistance is present on the airports.

Leave ideas&thoughts&feedback&critic in the comments
I do want your opinions....if this should be milsim [limited lives, ff on, pvp on] or arcade [unlimited respawns, ff off, pvp off].

How about in PVP mode the teams must capture and return the HVT? - stops them GL'ing the town in a desperate bid to win, also means that there's more conflict between teams with the extraction phase(s), plus a need to PID targets.

I've got one issue....with scripting/triggering....if you would please give me some help!
I want when a condition is met: a transport helictoper (opfor) spawn in with a i8_p in cargo.....making a paradrop over the AO (neochori) --- and then the i8 following the random waypoints (UPS_Lite).

Yet when spawning in the i8 I can use: (source: https://community.bistudio.com/wiki/createUnit)

But thats how far my minds taking me:)....If it is not possible ill wont do a heli drop...but do a boring spawning on the ground.....

what are your thoughts? Can you help me please:) greets
Top

i stopped with that script....and just place some ai in my first version of the map.

I have another quest though:)....please help me...
I want to freeze the players/teams the first minute of the game....(aka synchronische starts)....would that be a thing? is that is ot add in the script?

I'm not knowledgeable enough to answer your questions but if you're still struggling to get a response here, try asking the same questions on our "zeus-dev" Discord channel here

Some of our community's more knowledgeable mission devs frequent our Discord more often than these forums so you are more likely to get a response. You can also try asking for help on Teamspeak.
Top

Users browsing this forum: No registered users and 4 guests