Any Topics related to the No.1 Server
Post Reply
5 posts • Page 1 of 1

In hot anticipation of Tanks DLC launching next month I'm putting together the bones of a mission now so that we have something to play out of the cage on 12 or 15 April.

This post is to try and figure out a few things:
1. What proportion of people have bought/will buy the Tanks DLC (ie will anyone be pissed off if they're left being infantry or conversely do they love the fresh air of Altis and hate sitting in a tin can)?
2. How to integrate the Daleks err... Nyx into an infantry squad or are they integrated at all? I've laid out examples in the screen grab below. Ask yourself what would you rather command 3 or 4 squads of. (I've put Moras as place holders for Nyxs just now) 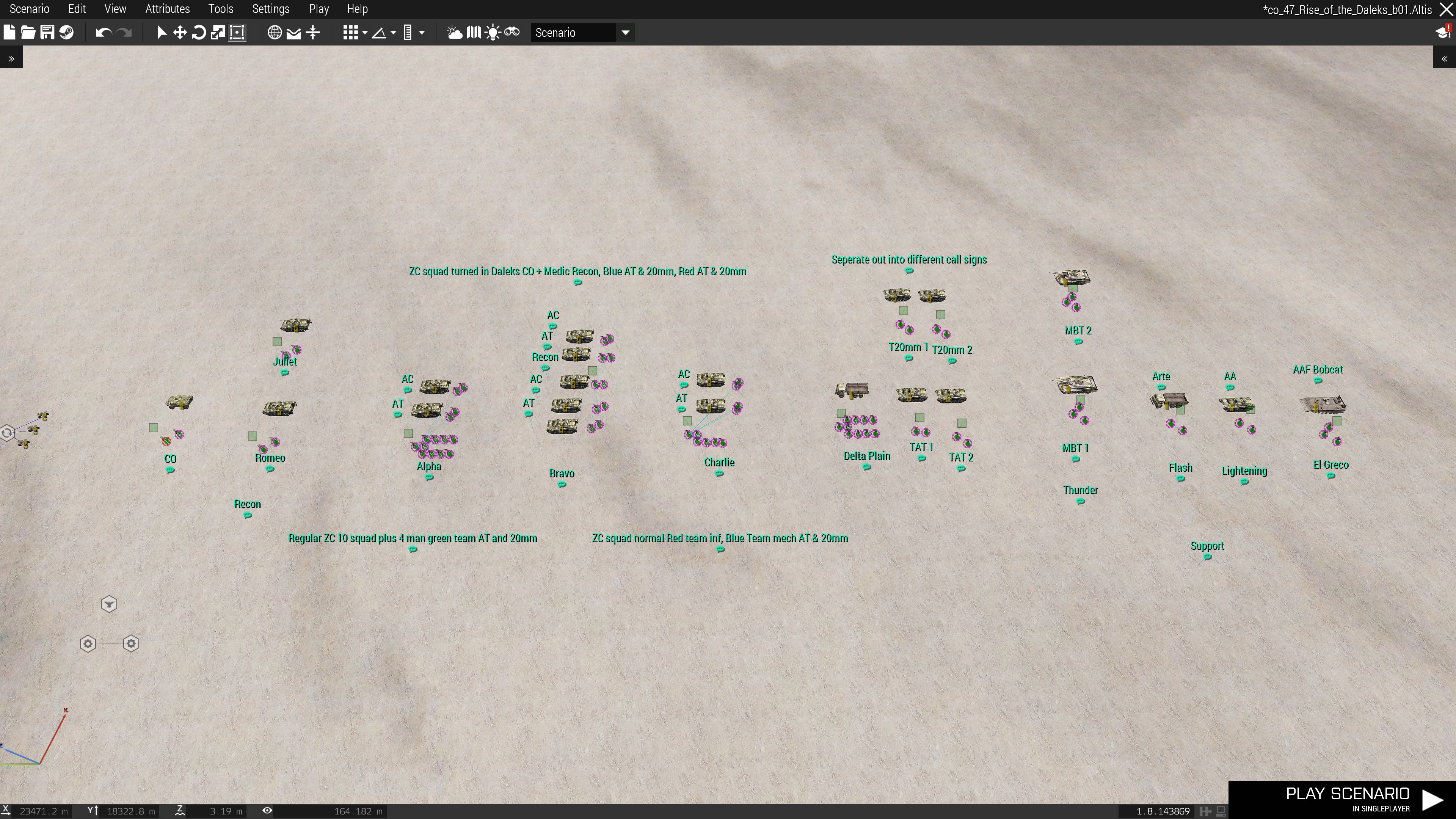 To answer my own question:
i) Yes I bought the DLC pack 2 so I'm golden, and I'm unfussed as to whether I slump in on on foot or cruise around attracting the wrong sort of attention from CSAT AT dudes...

ii) In general I think the fewer call signs the easier everything is to manage from the COs point of view. And to keep everything mobile i quite fancy three teams of the Charlie example + a zamak to get there quicker (although i think 4 squads of Bravo would be lots of fun)
Top

1. Don't worry to much about it. As long as you leave a few slots (probably best to keep it 50/50) that do not require the DLC you will be alright.

2. The Nyx is basically a copy of the Wiesel, which is a special little vehicle but also extremely versatile. The uses of the Wiesel/Nyx are threefold.

A. IRL it is an air mobile platform, the German army used to transport them around in Chinooks and CH53s and used them to augment their paratroopers with more firepower like ATGMs or an autocannon. So it should be a key aspect that it is easy to transport and can thus even be deployed with troops behind enemy lines. I have not tested if BIS did their research though and this is actually possible with the Huron for instance.
B. The vehicle is extremely small and is difficult to spot and target. What is cover for an infantryman or small car can also be cover for a Wiesel/Nyx. A simple ditch may be a hull-down position, a few bushes full conceilment.
C. Because of this size advantage it is also very flexible maneuvering through difficult terrain like thick vegetation or rocky slopes. It can keep up with its paratroopers and also flank the enemy from positions they considered unlikely.

So to answer your question I think the thing in Arma is best employed as a mobile and hard to spot recon platform (see the radar variant), or additional firepower for an independently operating light infantry force. It should also not be tied directly into squads as it needs autonomy and freedom of movement to compensate for a lack of armor and to use its mobility. It's probably just best to run them in section pairs that loosely maneuver in support of an infantry move. Operating together with tanks, they probably help most as recon or AA.

A few notes about your orbat: Keep vehicles operating in pairs. I noticed you split your MBTs up which is something you should not do. The smallest fighting unit should always be two vics. Also consider that with only two MBTs in an assault, who is gonna do all the spearheading and heavy lifting? Consider force balance and distribution. Also your callsigns are mighty generic and misleading. If you don't want someone to immediately scrap them and use his own I suggest using names that let you assume what the role is at a glance. Or simply use IRL counterparts and/or simple job titles (i.e. "1st Recon Plt, 1st Squad" for a Recon Team; or "SHORAD 1" for AA). Keep special names to truly special assets or objects.
Top

Jim and I have recently had a chat about this, but for the benefit of other community members I'll summarise my sentiments here.

The community seem to be pretty receptive to DLCs and we always run with the line that we support BIS DLC on the server.
Furthermore, people like tanks, and as Striker said, you'll have (hopefully) enough slots to cover those that perhaps can't afford it just yet elsewhere.
So I wouldn't worry too much.

With the Nyx, and any new asset for that matter, just be careful not to throw five of them at a situation without some reasonable justification for it.
People will be most receptive to the end result if the vehicle is used in situations it is designed to excel in, or perhaps when deliberately pitted against one of it's weaknesses but with the means to find an alternative solution. To this end, Striker's first post will be a useful tool.

We no doubt have a lot to learn about these new assets, so I'd be tempted not to focus too heavily on specifically what should and should not be done. Things will change and it's ok to design an imperfect mission with the aim of improving following feedback. The best thing any mission maker can do to design around an asset is to understand it's mechanics, and that will take both time and testing.

Keep up the good work, and look forward to playing it.
Top

Thanks Striker, thanks Lawman - will pull something together and we can all use it as a learning experience!
Top

Jim, I believe you've heard my opinions about vehicles being within infantry sections. I will never put an IFV in the same "group" as the infantry - even if its callsign is "IFV Alpha" and it spends the entire mission attached I believe they should be separate. The Nyx is no exception to this IMO - whether attached to an infantry section or operating as a platoon of Nyx they will each be their own group.

This also falls into my dislike of 2-man IFV crews where the infantry SL is the vehicle "commander". As far as I am concerned the gunner is then overworked with spotting and the infantry commander shouldn't be responsible for commanding the IFV. One of the IFV Command or Infantry SL should be on CO/PLT net, however the act of working as a coherent unit is balanced between both commanders. If you look at how I did the Orbat for Denial Of Service the IFV are their own groups but intended to work as a pair with infantry with Alpha, Bravo, and Charlie nets set up for them to use.

If the Nyx are fielded as a platoon of their own/similar kind (e.g. IRL several AA could be deployed with a radar spotter) then there would be appropiate "Nyx" channel in the same way that a Tank Platoon would have a "Thunder" (or similar) net. At that point Nyx-1 is on CO net and is the platoon commander, but each Nyx has its own TS channel for the crew and is its own unique callsign.

I would tailor the extra channels so each Infantry/Vehicle pair has their own comms net, which whilst I know some COs are reluctant to get in to is how I would "intend" the mission to work. So in your example above the I would take the right-hand model, where "Delta" and "Delta-Nyx" are independent groups but have a dedicated radio channel available to them. If you take something like Bravo, as a group of Nyx, that would be Lima-1 through 4 with a "Lima" net and Lima-1 on CO net. Note that I just used "Lima" for an example here, you could call them Lima for "Light Tank", or November for "Nyx", or "Folau" because I'm an awesome guy. At that point your radio structure would look like this: This may mean you have lots of channels, but that many callsigns is probably too many for the CO and I won't allow 2 vehicles in the same group, so I guess based on those assumptions I get forced into having that huge pile of Radio Nets. I think that the max anyone is on will be 2 extra, else I would redo it because it becomes too many. I expect someone will say I am complicating it and other nets shouldn't be necessary, but actually if you have that many people I would expect intermediate layers of command else the CO will be driven mad. You could drop PLT 1 and just have the N infantry section leads on CO if you wanted I suppose, but I would at least have the option of setting up the radios as such and probably hint that way in the briefing.

You can do this with TS/Vehicle chat, the advantage of this as far as I'm concerned is: Though it is a bit of a ballache a little irritating to organised, and I wouldn't bother for a short mission, this would appear to be a hefty mission to have that much stuff on the table