Any Topics related to the No.1 Server
Post Reply
39 posts


the current implementation of operations is not the actual version. Just a random selector. The actual one will be in the next update (606X )and works more like a choice of ops.

606X is now on the server, has full mission systems
Not sure exactly what else he added
(This is supposed to be the last closed beta version)

I have repositioned everything in the base to the edge of the airfield, which is closer to the MSR.
This is most likely the best location for us.
You have a selection of vehicles already on the map and some virtual arsenal crates
Server is passworded while this mission is on there.

We may run this for the first hour of game night on Sunday 22nd October, depending on opinion

For now please get on there, test it see how it plays
Top

On lobby screen click BLUFOR top left corner to see orbat
Do NOT press 'U' - blurry screen
Bleed out (not very long) moves you to Redeploy Screen - Redeploy not working - requires full client restart!
Vehicle depot is placed over a curb stone in car park


Intel found in the wild, then back at base at 'Access Mission Operations' big computer screen neither SL nor CO able to initiate the propagated missions on map 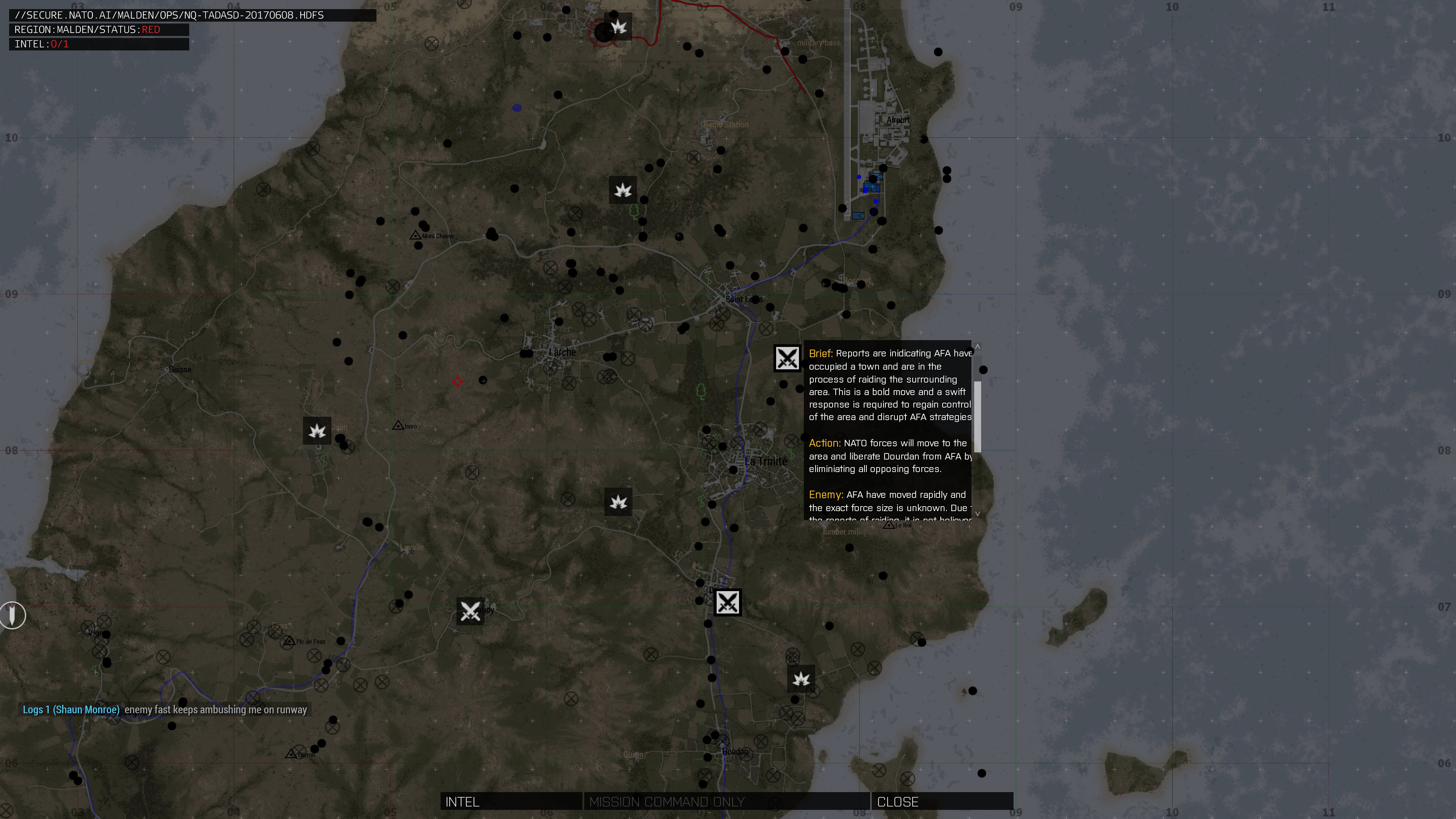 Functionality: Balance: With frequent bugs that require client restart to fix or abort then re-slot (pressing U key, broken respawn) as well as complete freedom with spawning vehicles and virtual arsenal, I predict that tomorrow's test at the start of gamenight maybe quite "difficult".
Top

Respawn seems to be broken or dysfunctional according to frequent reports, requiring players to rejoin the session to continue playing.

Pressing 'U' to allow to see names results in a visual glitch requiring clients to reconnect.

We ran a rather lengthy patrol earlier, running into contact quite a bit and collecting all their intel. The mission always confirmed the collection of intel yet never made anything out of it/ created a task/mission. It feels a lot like stumbling in the dark without any documentation on how the mission works.
Top

You are mentioning bugs about systems that aren't fully implemented. So this is no surprise.
The release was to test the mission tasking system, that's the only system that was defined as implemented

as for the vehicle depot on the curb stones, that's my bad, this was me repositioning all the assets and trying out an area that may become the base when we edit the final version

Apparently the "U" bug is logged already
Respawn issue unknown cause at this time, hoping to get a quick fix before game night or this will be a no go

Not sure what the issue is with the Intel computer, from my testing the addaction works, but not sure what its supposed to do, as you have stated, poor documentation
Top

I see I missed this afternoons test! sorry -

So the task management system is working today! but respawn is still broken. 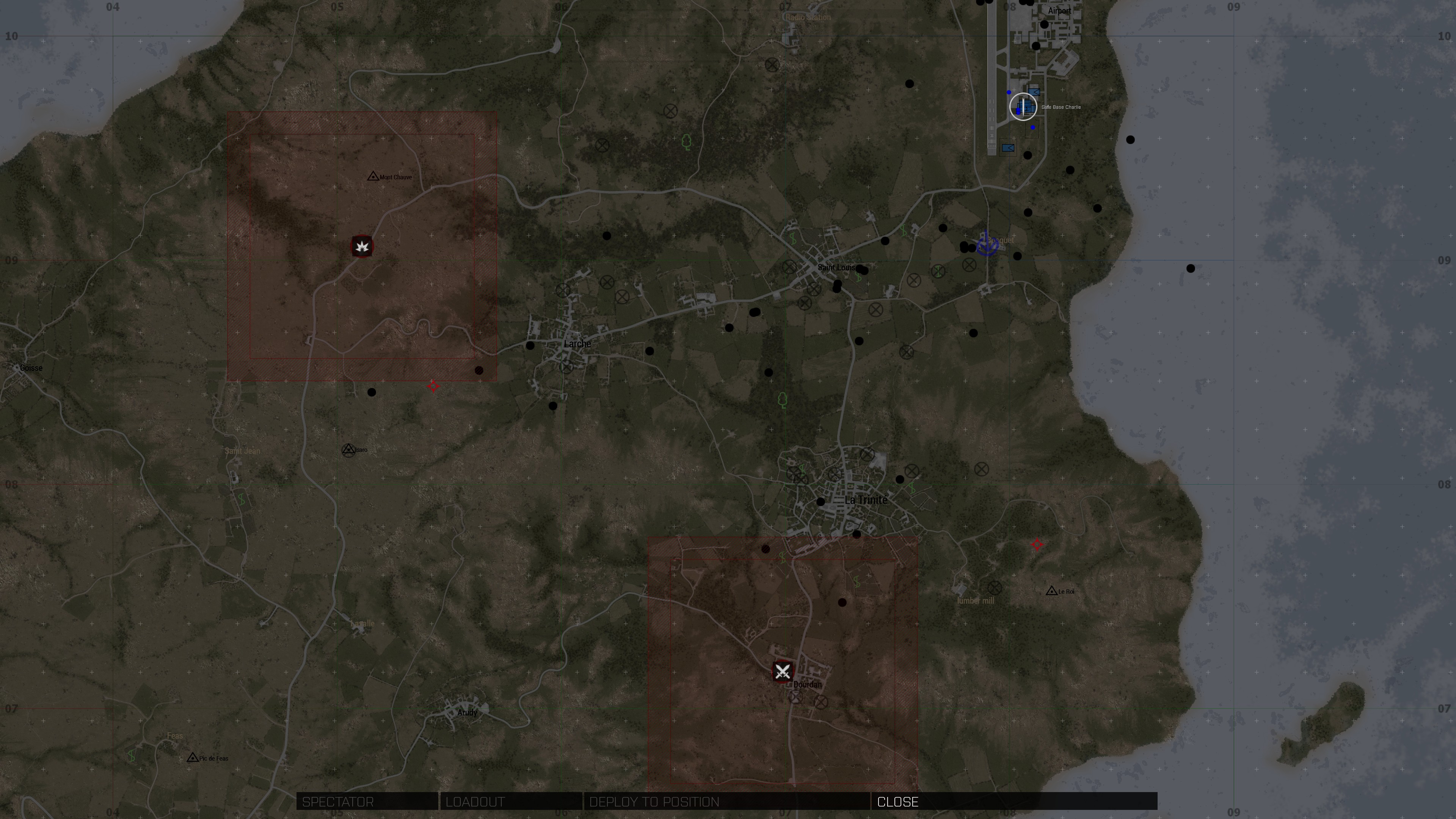 EDIT: Should mention that I got the tasks to work as CO and not running ZClient
Top

With gamenight drawing closer we've decided to postpone this test and continue with the regular gamenight format.

This is due to bugs and other issues that would introduce too much delay, confusion and frustration. From the tests people have made so far it's pretty obvious it's not ready and has failed as a test.

We will move this release onto the no1 test server for anyone still wishing to test the various features such as they are.

@Stealthy & @Terox,
we are all appreciating your great effort on this great task.

Nothin to add much with the errors and bugs reported above. Just one small thing. The Airframe Spawn is a bit tight. More space for Maneuvering would be appreciated.

Good that its possible to set a loadout on CAS Jets. This makes the missions more diverse. Take on mission only what you need and leave the rest in base.

I tested that on the feedback from broken rearm, repair mechanism.

IF that air asset compound remains the same size (everything was done in a quick hurry base layout wise so don't expect it to stay the same), we will have to include a Bobcat or similar for towing the jets in and out from the taxiway.

The repair and rearm functionality seems at present to be based around "Respawn vehicle" rather actually reloading the individual pylons. Shame, but may be fixed in the future. There is some limitation that can be done on the airframe pylon loadouts in the initial mission parameters so keeping cas ordnance within the realms for feasibility is possible.

I would love to find the time to test the other functionality but honestly, think I'll wait for the next release.
Top
Post Reply
39 posts